Encounters with the “hairy man” of the rugged Blue Mountains just west of Australia’s largest metropolis, Sydney, have been recorded from the time colonial settlers first appeared in the area. While long before the settlers’ arrival, the original inhabitants always feared and respected the elusive, hairy hominid, often referred to as the yowie or yahoo.

Here we look at some of those early reported encounters, but first some personal experiences with what might just be the legendary hairy man of the Blue Mountains. 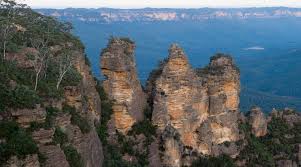 Personal experiences with a hairy man?

Near my home in the Blue Mountains is a fire trail that winds down towards a creek flowing through a steep gully thick with rainforest-like vegetation. While close to civilisation, it is rugged bushland. I half-jokingly refer to this as the “Yowie track”. Why? Because I’ve had a number of unnerving encounters while walking my dog along that track.

At one point during that first trek along the Yowie track, I suddenly heard a loud snapping sound. I stopped walking. It sounded all too close. Seconds later, I heard three or four heavy (make that very heavy) footsteps in the nearby scrub. I’ve heard many kangaroos and wallabies hop through the bush in my time, but this was different. These sounded distinctly bipedal with a huge gait. Although only a short distance away, the bush was thick and I couldn’t see what had taken those steps. I didn’t want to. But I knew something was there, and that after taking only a few steps it had stopped. I suddenly felt an eerie sensation of being watched. My dog, a young pup at the time, was oblivious. I quietly made an about face and we quickly got out of there.

Over the coming months, I had several more experiences along that track. One time, while ascending back out of the gully, I heard something crashing down the hill on the opposite side of the creek. It was coming towards me…and moving fast. At that distance, however, I felt relatively safe, so I hung around for a moment or two…and then quickly left.

Then, while alone chopping wood on a neighbour’s property, I heard an unearthly call coming from that same gully. It was chilling. It sounded like a lion’s roar combined with a high-pitched scream, as if from a dying animal. While sounding like two distinctly different calls, I had the impression it came from the one animal. I’d never heard anything like it.

I never did see anything in the flesh. And while I can’t claim to have had any convincing encounter, for me these fleeting experiences add some credence to the many encounters reported in the local area. More about those reports in a future post.

And now on to dispel the myth that the Australian yowie is a modern invention mirroring modern reports of the Himalayan Yeti and North American Bigfoot or Sasquatch, as some of a more sceptical bent often claim.

The Blue Mountains, which covers an area of some 10,300 square kilometres, were first crossed in 1813 by explorers Blaxland, Wentworth and Lawson. Not long after that first crossing, reports began of hairy ape-like creatures terrorising pioneers following in the footsteps of those first explorers. These reports were no surprise to the local Aborigines, who believed the hairy man inhabited the entire Blue Mountains.

Some of the earliest settlers’ stories date to around 1820. One involves a soldier of Governor Macquarie’s regiment.

While hunting in the vicinity of what is today Springwood, it was said that the soldier came across an “ape-like animal” that approached him from out of the trees. The unknown creature made threatening gestures, whereupon the soldier reportedly shot the unknown animal dead. What a media frenzy that would initiate today!

Another encounter from around the same time involves a pioneering farming family in the Newnes Valley who claimed that a “hairy man” approached their bark hut, peered inside through a window and then dashed back off into the bush.

Of course, you cannot have hairy men without hairy women. And this report, also from 1820 in the Pagoda Rocks country, involves a “7 foot tall female creature, clad in a marsupial hide garment”. According to the story, the hairy woman abducted seven-year-old Adam Firth from a creek bank near the family’s farmhouse. Adam later claimed that he was carried off by the creature and kept in a large rock overhang where she tempted him with a kangaroo leg she’d cooked over a smouldering fire. He said he could hear others in the bush nearby. He escaped after the hairy woman bolted into the bush upon hearing the cries of his family and their dogs.

Young Adam Firth may have had a lucky escape. Much later, in 1893, a shale miner, Charles Wilson, from Glen Davis near Newnes went missing. He was found dead several days later, the condition of his body suggested he’d been the victim of cannibalism. Locals were convinced that the “giant hairy man” was the cannibalistic culprit. While such a report is rare, many Aboriginal legends involve creatures that tear apart and eat their victims.

Later. in 1891 two Oberon men witnessed a hairy man in what is now Kanangra-Boyd National Park. After finding “the imprint of a huge foot” they were “startled by the noise of timber breaking, and a low, growling, grating sound.” On the edge of the cliff stood “an animal of the baboon species” which “swung himself over the cliff by a huge vine, and descended in that manner until he disappeared in the gorge beneath”.

The hairy man makes the news

Stories of hairy man encounters soon reached the city and were widely reported in the papers of the day. One such article appeared in Australian Town and Country Journal from the late 1870s.

“A party of sawyers working in the Walla Walla scrub (near Bathurst New South Wales) came upon the body of an unearthly looking animal, human or inhuman they could not tell. It stood about 9 feet in height with head, face, hands similar to man’s, one of its feet resembled the hoof of a horse, and the other was club-shaped; the body was covered in hair or bristles like a pig.”

In Our Holiday Resorts: An Artist’s Wanderings in the Blue Mountains which appeared in The Illustrated Sydney News in 1888 it was eloquently reported: “…the peaceful little village of Lindon (Linden) was shaken to its centre by the report that a monstrous and mysterious apparition had appeared to a lady, the wife of the caretaker of Sir Henry Parkes’s property at Faulconbridge. It seems that she was in the act of gathering a few sticks when a commotion amongst the fowls attracted her attention, and on looking up, before her stood a Thing about seven feet high. The black hair growing on its head trailed weirdly to the ground, and its eyeballs were surrounded with a yellow rim. It was the hairy man!!”

The article continued: “Her husband, on learning that a ‘hairy man’ was in the back yard, sallied forth with his gun to put daylight through him; but he of the flowing locks, in order to avoid an unsought-for publicity, had disappeared, taking several of the fowls with him to soothe his lonely hours. But, and this was imparted to us with great solemnity, he left a track three inches deep behind him!”

It was also reported that a Mr Cummins of the Royal Hotel in Springwood (the Royal is still trading today) offered 50 pounds for the hairy man so that he might “fasten him up in a hen coop and exhibit him to an admiring public, or sell him as an advertisement to a hair-restorative company”. You have to admire Mr Cummins’ entrepreneurial spirit.

In those early days of settlement in the Blue Mountains, the hairy man, yowie or yahoo was widely accepted as a real living creature as wild and dangerous as the rugged wilderness itself. For the local indigenous peoples of the area, the creature was to be left alone and respected.

Today, stories of such encounters are often regarded as little more than myth or the imaginings of vulnerable people feeling out of place in a strange and hostile environment. However, reports of encounters with the hairy hominid persist to this day, and should not be ignored. We explore some of those modern yowie encounters here.

7 thoughts on “The wild hairy man of the Blue Mountains”