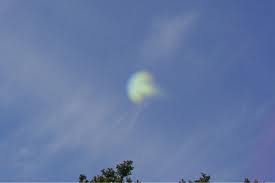 As it developed, the flying mushroom sighting would have all the ingredients of a typical UFO case; a credible witness, sensational headlines, an investigation, implausible explanations, a healthy dose of scepticism and ridicule, denials by so-called experts and finally, a witness who regretted having ever come forward with his incredible story.

With many Melbournians waking to a hangover from New Years Eve celebrations, the sober veteran A.N.A pilot, Captain Douglas Barker, looked skyward from his home in East Kew and saw what he described as a semi-transparent “mushroom with a stalk” flying over the Templestowe Brickworks at 10.15 am.

Melbourne’s The Argus, on 2 January 1954 broke the story with the slightly mocking headline: Airman sights a ‘mushroom’ in the clouds. Flying mushrooms are with us!

“He told the Civil Aviation Department that he saw a semi-transparent object shaped like “a mushroom with stalk” over the Templestowe brickworks at 10.15 a.m.”

The article went on to quote Captain Barker: “I was sitting on the edge of the dining table in my home at East Kew when I noticed a clear, plastic-like, outsize ‘mushroom’ oscillating rapidly in and out of the thick cloud, which was at 1,800 to 2,000 feet.

“The object, which was flying well below the safety level in that area, was travelling faster than any jet I have seen, and was roughly four times the size of a DC4 seen side-on.

“It appeared to have something trailing beneath it like a thick stalk.” He speculated that this stalk could’ve been a “small observation car”.

“I am not interested in impressing anyone, neither had I been celebrating the new year. I was in bed at 11 p.m.”

Naturally, the captain’s initial report was taken with a large dose of scepticism when reported to authorities.

“When I reported it to Flight Control they said I should take more water with it (meaning he should water down his alcohol), and told me a Convair was in the air in that position at 10.15 a.m.”

However, Flight Control’s explanation did not wash with the experienced aviator.

“My flying mushroom was nothing like a Convair in appearance. I have been flying since 1937 for A.N.A., and served for three years with the R.A.A.F., so there is no question of confusion,” he protested.

“The regional civil aviation director, Mr. A. R. McComb, said in Melbourne tonight: ‘We give serious consideration to all reports of this nature and our instructions are to forward them to our head office where they are studied.’”

Airline officials said that a Convair airliner had been over the Yarra Valley about 10.15, but Captain Barker said he had “never seen anything less like a Convair”.

“He stated: ‘First of all, it was travelling about 700 miles an hour, well below the minimum altitude for the safety of normal aircraft.

“’It was also very big, about four times the size of a DC4. I see Convairs every day, but this resembled no aircraft I know.’”

Captain Barker, however, revealed further details of what he had witnessed in the skies above suburban Melbourne. “Its main body was elliptical, with a long shaft, about the same length as its body, hanging below it. At the end of this thin, slightly curved shaft was a sort of control tower. It would fly for a short time into the clouds, then sink down to the clear sky. Its colour seemed to be changing from clear plastic to sky blue. I couldn’t possibly confuse this with any plane. It was four times as big and travelling 10 times as fast as a DC3.”

But civil aviation officials remained unconvinced and believed that Captain Barker’s flying mushroom was most likely “reflections from a Convair in flight,” and that a Convair had been “testing its landing gear” in the vicinity and that this could’ve “looked like a flying mushroom to a ground observer”.

The report went on to state that: “Neither the Convair pilot, Capt. J. P. Boyd, nor radar-screen operators at Essendon [airport] saw anything unusual.”

“Captain Boyd said the Convair was flying in and out of cloud at 2,000 feet about 10.15 a.m – the time Captain Barker said he saw the strange object. Captain Boyd, said that during the flight he tested the Convair’s landing gear by putting it down several times.”

Could a pilot with 17 years flying experience with both the Australian Air Force and a commercial airline really have mistaken a common airliner lowering and raising its landing gear several times as something as exceptional, and, perhaps even as otherworldly, as what he had reported?

Two days later, there was an even less plausible explanation for the flying mushroom.

Flying mushroom was just a flock of birds

In what must have been an insult to Captain Barker, the Barrier Miner, on 4 January, conjectured that his “flying mushroom” was likely nothing more than a mere flock of birds flying in formation.

“Today a man at Heidelberg said ‘the mushroom’ was a big flock of birds. This version came from Mr. A. C. Dearling, a public servant, who was building a house at Heidelberg.”

The public servant told the paper that he “had a clear view right across to Doncaster and beyond, and I saw the mushroom shaped phenomenon”.

“It started as a complete column and turned into a mushroom shape, rising to about 1000 feet.”

Really, a flock of birds … travelling at 700 miles per hour?

Captain Barker’s colleagues, however, were more inclined to take his word over that of the public servant busy building his house in Heidelberg.

The Barrier Miner appeared to be having a bet each way.

On the same day it published the article on Barker’s UFO sighting being nothing more than a flock of birds, it ran another story with the headline: Veteran pilot is backed by colleagues.

“With 17 years and nearly 14,000 hours flying experience behind him Captain Barker’s pilot colleagues are inclined to back him up,” the article stated.

It then continued with a further statement by Captain Barker: “I just do not accept the department’s version.

“At the time I saw the mushroom, the sky was completely overcast.

“I do not know much about the workings of light, but I fail to see how the reflection of a Convair could come through that heavy cloud.”

The report went on to add that Captain Barker had been expecting to find his crew mates and colleagues at Essendon airport sceptical about his report when he went to work.

“But he had been surprised. Everyone had been intensely interested. ‘Two or three senior pilots mentioned similar, strange, experiences. Not with mushrooms, but flying saucers and things,’ he said.”

“They said they had been too scared to mention what they had seen for fear of ridicule. All my colleagues have taken my report seriously.”

Unfortunately, the ridicule from those far less credentialed soon got to Captain Barker.

“But I am going to forget it now,” he said. “I have not submitted a report to the Civil Aviation Department on the matter and I am not going to. If they want one they can come to me.

“But it looks as if their minds are made up. They are convinced it was an hallucination; but I know what I saw.

“I do not see any sense in hammering at people if they will not believe it. I am not interested any more.”

It seems nothing much has changed in nearly 60 years.

6 thoughts on “The flying mushroom of 1954: All the ingredients for a modern UFO sighting”