Australia certainly has its share of large and deadly reptiles. The saltwater crocodile grows as large as 7 metres, or 23 feet, and is definitely a seriously deadly predator with a diet that includes the occasional luckless human. The ‘salty’ as they are affectionately known in the Top End are in fact, the world’s largest species of crocodile. 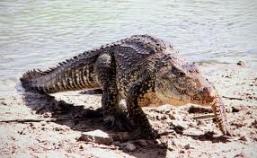 There may, however, be other monster reptiles surviving undetected in the Australian bush. Monster reptiles like the 18-foot-long Prenty, the deadly and “unnatural” Gonderanup, the gigantic serpent of the Mallee scrub and perhaps even a reptilian hold out from the era of the mega fauna – the megalania.

“There is no room for doubt about the existence of the prenty, a gigantic lizard of Central Australia,” reported the Cairns Post on 14 August 1931.

“An early caller at The Telegraph office was Mr. B. W. G. Phillips, a great friend of the late T. C. Wollaston, who discusses the Prenty in his book, “Opal – We of the Never Never.” The Prenty, according to Wollaston, “has leisure and space to grow properly. It is powerful in limbs, beautiful in skin, its reach exceptional, eight feet in length when its tongue is fully extended.

“Its color is gamboge yellow, with blackish-grey markings; and perfectly round spots- as large as a shilling – adorn the sides and neck like a pedigree Ayrshire. The prenty has a long head and brilliant eye, and when it stands up with stiffened legs and arched body, its head bent forward, it looks a formidable beast.”

But Wollaston’s 8-foot-long Prenty, while formidable, would have been no match for the 18-foot-long monster lizard reported in Darwin’s Northern Standard just 5 months later in January 1940.

In Seeking an 18ft. Lizard, it was reported that Fred Blakeley, leader of the first expedition to find the legendary Lasseter’s Reef and known as “The Bicycle Bushman” would soon set off in search of another outback legend – the giant Prenty lizard of Central Australia.

“He hopes to bring back one alive. He claims to be one of the few white men who have seen a giant Prenty. He describes it as a mammoth lizard about 18 feet from snout to tail-tip. Its claw tracks are about 6 feet apart.

“The claws are sharp and poisonous and inflict a wound which festers quickly and rarely heals.

“The giant Prenty, he says, attacks chiefly with its tail. It can fell an ox with a sweeping blow. It is faster than a crocodile and its gait resembles a gallop. The Aborigines call the Prenty a debil debil,” Blakeley told the Northern Standard.

For the local Aborigines, this giant lizard instilled great fear. Even the glare of the giant Prenty was enough to cause certain death.

Blakeley recounted the story of one Aborigine who apparently died at Alice Springs a week after being glared at by one such monster reptile. According to Blakeley, a subsequent medical examination found no cause of death.

Bark of a dog, growl of a lion 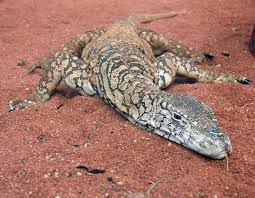 This wasn’t the first time that Blakeley had regaled the public with stories of giant lizards roaming the Australian outback. Nine years earlier, Blakeley’s giant Prenty was discussed in Hobart’s Mercury.

“Scientific circles are keenly interested in reports by Central Australian prospectors, now in Sydney of a fierce and gigantic lizard, known as the ‘Prenty,’ which is said to occur in wide spaces of the interior.

“Mr. Fred. Blakeley, leader of the Centralian Gold Exploration Expedition (and a brother of the Federal Minister) declared that this remarkable creature, which grows up to 15 feet in length, has been seen by white men.”

In the article, Blakeley recounted the alarming experience of “Big Jim,” an old prospector, who stood 6 feet 8 inches tall and weighed 18 stone.

“Big Jim said he was walking along scanning the ground, as is the habit of the opal fossicker, when he heard a peculiar sound, and, looking up, saw an enormous reptile challenging him.

“The man snatched up some rocks, whereupon the ‘Prenty’ lashed its tail, undulated its back, and came springing towards him. As it did so it uttered a roar that mingled the bark of a dog and the growl of a lion. Big Jim promptly ran for his life.”

Blakeley said that he had found the tracks of the creature the next day, and that they measured the distance from one outside claw to another as 6 feet 3 inches and estimated its length as 15 feet.

And in a letter to the Townsville Daily Bulletin on 15 January 1937, Albert Morrow of Mapperley Station, Alice Springs offered further insight into the Central Australian Prenty.

“… What we do get here (Central Australia) and parts of the Northern Territory, which I do not think are anywhere else in Australia, is the giant goanna or perentie, better known as ‘The Prenty’. About four months ago in Alice Springs, I was shown the skin of one ten feet in length. It was killed at Weinikie Gold Field, and was killed for food. Strange as it may sound, it is very good ‘tucker’ and the flesh is white.” 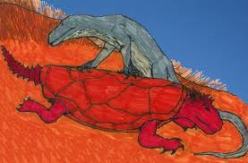 In May 1899, an article by explorer, historian and journalist, Ernest Favenc, appeared in Sydney’s Evening News.

In A Tale of Central Australia, Favenc wrote of an expedition party’s terrifying encounter with deadly monster lizards the Aborigines referred to as Gonderanup.

“It was a brilliant moonlight night … and the party were smoking after their meal, when they were startled by an agonised cry from one of the horses. There is no sound more startling and painful to hear than the semi-human cry of a horse in mortal pain and terror, and the men, starting to their feet, picked up their firearms, and hastened in the direction of the sound….

“One horse, a grey, was plunging frantically in its hobbles, rearing and uttering the terrified scream of pain that had startled them. As they approached they saw, clinging to the horse’s throat, with claws buried in the shoulders, and its jaws having a firm grip on the poor creature’s throat, what appeared to be a monstrous lizard. The horse, as they approached, stood still, trembling all over, but the horrible thing fastened on it never moved.

“Putting his carbine close to its head at an angle that would not hurt the horse, Murray fired. The claws of the thing relaxed, but the jaws never opened, and the frightened horse began turning round and round with the dead creature hanging on to its throat. Then it staggered, fell, and, with a shuddering gasp, died. The creature that had attacked it was, in fact, an enormous sort of lizard, with a huge disproportionate head. The iron jaws, armed with cruel teeth, still retained their death grip on the dead horse’s throat from which the blood was now pouring.

“While engaged in looking at it Dandy was seized in the side by another of the horrible creatures. Rafter, the other man, killed it, but not before it inflicted a terrible wound. Murray called to them to catch the horses and get away as soon as they could, for others of the brutes were coming ….

“Dandy could do nothing but stagger to camp; while Murray and Rafter ran after the horses to drive them up. Dandy heard shouting and shots, but the others did not come back.

“He heard another of the creatures crawling towards him, and, overcome with blind terror, he fled.”

Dandy and Rafter would soon die out there in the hot desert from the wounds inflicted by the Gonderanup. And of the horses that had been attacked, only their skeletons remained, the ferocious reptiles having picked the flesh clean.

“When they approached the camp all was silent. Martin shouted for Dandy, but got no answer. Poor Dandy was dead. The bite of the Gonderanup seemed to be fatal.

“Murray never would tell the whole details of his fight with the lizards on the bank of the salt lake… The subject seemed repulsive to him, and he swore that you could hack the bodies off the creatures, and their jaws would still remain fixed.

“They were not natural, he said, and old blackfellows of that part who remember them say so too.”

Great serpent of the Mallee scrub

It is not only deadly monster lizards that are said to inhabit the Australian outback. Further south, in the semi-arid Mallee districts of Victoria and South Australia, there are stories of another monster reptile, a gigantic serpent-like creature the local Aboriginals call the Mindai.

“The name of this creature is the “Mindai”. He is described as a serpent of immense size and length, with a black mane… His girth is that of a good-sized gum-tree, and his length that of a spar fit for the main-topmast of a seventy-four [sailing ship]; while others… declare him to be like a river or a road – a method of expressing their ideas of a thing without a beginning or end.”

Like the Mallee’s original inhabitants, settlers to the region have also encountered the great serpent of the Mallee scrub.

“A squatter on the lower Murray, in riding through the Mallee, a few miles from where the two men saw the enormous monster … met a snake which reared itself up to the same height as his horse’s head, and from the strike of which he states that he had a very narrow escape. Other white men have, at various times, seen extraordinarily large reptiles in the same quarter, and there can be no doubt that an unusually sized snake does exist, whose habitat is the Mallee scrub; but like the famous bunyip, it manages to keep itself very much out of sight.”

Read more about the great serpent of the Mallee scrub.

There is no doubt that an enormous monster reptile once stalked the Australian bush. Megalania, is believed to have died out around 30,000 to 40,000 years ago. It’s likely, however, that the giant reptile shared the Australian landscape with the continent’s first human inhabitants for thousands of years.

When it comes to the size of megalania, there is a great deal of conjecture. Estimates of the creature’s length range from 4.5 metres (15 feet) to 7.9 metres (26 feet). Its weight has been estimated at anywhere between 331 kg (730 pounds) and several tons.

Whatever the true size of megalania, it must have once projected a formidable presence in the Australia bush.

In the Cessnock district of the Hunter Valley in NSW, a local farmer reported seeing a giant reptile in a paddock on his property in 1978. The monster reptile was apparently ripping into the flesh of a cow with its massive jaws and teeth. Using the spacing of fence posts just beyond the carnivorous lizard, the farmer estimated its length at an astounding 35 feet, and around 9 feet tall on all fours. After arranging a search party of local farmers, the incredible beast could not be found. The bloody remains of the poor cow and some large indistinct tracks in the grass were all that remained.

Australian cryptozoologist Rex Gilroy has also collected a number of modern megalania sightings including an apparent 30 foot reptile which killed livestock in the Euroa district of Victoria during 1890 and a group of Scouts, including the Scoutmaster, who reported sighting a 22-foot-long lizard.

And finally, a video of an eyewitness recounting his sighting of yet another monster reptile.

Could megalania be just one of Australia’s monster reptiles roaming the remote wilderness of the Australian bush today?

7 thoughts on “In search of Australia’s monster reptiles”