On 2 August 1941, the Courier Mail broke the news that for several months, a mysterious creature had been sighted lurking in Lake Dynevor, just outside Thargomindah, a small outback Queensland town located 1,100 kilometres west of Brisbane. News of the Thargomindah Bunyip quickly spread and soon newspapers across the east coast were updating readers on the latest news of the mysterious lake monster.

In what would seem highly unlikely in today’s headline today, history tomorrow, 24-hour news cycle, the story of the Thargomindah Bunyip carried on for months following the initial reports.  There were reports of photos taken, speculation of a whole family of bunyips, search parties organised, search parties postponed due to politics, protectors assigned, and some wild speculation as to the true nature of the unknown beast and how it came to inhabit a remote lake in the middle of the outback.

Search Parties For Dynevor ‘Bunyip’ the Courier Mail’s initial article reported that: “Parties from Thargomindah have gone to Dynevor Lake to search for the strange creature that is said to inhabit the large expanse of water on Dynevor Downs. Several people had been able to get within 200 yards of it, said the Thargomindah Shire clerk (Mr. W. Speedy) yesterday. Some reports said its body was between three and four feet long and others that it was the size of a bulldog. But its identity was still in doubt because each time it had eluded pursuers by disappearing into the rushes.

“He said that reports about a mysterious animal living in the lake had been circulating in the district for months, but until recently they had not been taken seriously. Now it had been established definitely that it did exist everyone was anxious to be the first to solve the mystery.”

On the same day, The Mail also reported the story with the headline: Townspeople Say ‘Bunyip’ Frolics in Inland Lake.

“About a dozen of Thargomindah’s population of 290 swear that they have seen the Bulloo River bunyip, the mystery of which is still unsolved.

“The people claim that they have seen a strange animal frolicking in the Dynevor Lake, some miles east of the town, which is 730 miles west of Brisbane, in a corner bounded by South Australia, New South Wales, and Queensland. Most descriptions tally with that of a seal, but how a seal would get to a saltwater lake 800 miles from the coast has not been explained.”

The Mail did provide one highly improbable, but nonetheless entertaining, explanation.

“One explanation is that a seagull, one of thousands which flock to the lake, played stork and carried a baby seal from the coast!”

And like in many reports of anomalous activity today, there was the tantalising prospect of something being captured on film.

“Recently, a postal Inspector, Mr. J. G. Utz, of Dalby, accompanied by the manager of the lake’s outstation, Mr. Curtis, saw some kind of animal splashing in the water near the crossing, and, whipping out a camera, snapped a picture. Until the film is developed, the accuracy of the shooting cannot be gauged.

“Mr. Utz said today that it was not likely that it would show much, as the animal was at least 90 yards away and the dawn light was bad. ‘It was nothing like anything I’ve seen,’ he said. ‘The head was black and at least a foot long, and the animal was grunting and splashing a lot. From the size of the head I would say it was about 6 feet long. I was told that many years ago a seal was seen in the Dynevor chain of lakes.

“This one has got me puzzled,” Mr Utz told The Mail. “Some people in Thargomindah say it’s a bunyip, whatever that is.”

Perhaps Mr Utz should’ve gone to his bookshelf and consulted his encyclopaedia, just as one reporter did when researching his article “Bunyip” In Lake At Thargomindah “Swimming Pig” Seen? for Rockhampton’s Morning Bulletin on 4 August.

“A bunyip is reported to have been seen in Lake Dynevor, Thargomindah, 730 miles west of Brisbane. Thargomindah has described its ‘bunyip’ as ‘a seal,’ ‘a turtle,’ ‘a sea lion,’ ‘a musk duck,’ and a ‘swimming pig’.

“Twenty people think they have seen it. One man thinks he has photographed it. He is Mr J. G. Utz, a district postal inspector, who clams to have photographed the creature from a distance of 90 yards, while crossing Dynevor Lake, 22 miles from Thargomindah.

“Interviewed by telephone, he described the ‘bunyip’ as ‘something I can’t fit into a picture. Its head, which was raised about 12 to 18 inches above the water, reminded me of a seal. Before disappearing in the tall rushes it gave a vigorous grunt and caused a big disturbance in the water.’

“Queensland awaits the development of Mr Utz’s camera film in Dalby this week. He has doubts about it. ‘The light was far from good at the time, and I do not know whether the negative will be of much value,’ he said.”

“According to the Australian Encyclopaedia,” the article continued, “a ‘bunyip’ is a fabulous animal supposed to haunt swamps and shallow lakes in Australia and Tasmania, “While there is no evidence for the existence, now or in any age, of a large marsupial otter, such a creature is not unthinkable,” says the Encyclopaedia.

“But, even if it did at one time exist, and was the origin of the ‘bunyip’ legend, its qualities and features have been so confused with those of crocodiles in Queensland and seals on the southern coast that the resulting monster – in which many aboriginal tribes firmly believe – can only be described as fabulous.*

No figment of the imagination

On 13 August, the Courier Mail announced that a search party would attempt to solve the mystery animal of Lake Dynevor.

“A party to search for the bunyip of Lake Dynevor, 22 miles from Thargomindah, will be organised by Mr. G. F. Gooch, owner of Thargomindah station, when he returns from the Brisbane Show. He said yesterday that he proposed to place a net across the neck of water where he had seen the creature in the hope of catching it.

“The bunyip resembles a seal, but it was impossible to say what it was, he continued. He saw it in the early morning at a distance of about 80 yards. It disappeared into some rushes near the bank. Mr. Gooch, who is chairman of the Bulloo Shire Council and president of the Western Graziers’ Association, will leave for his home on Friday.

Mr Gooch, had earlier told Queensland Country Life that the Thargomindah bunyip is “no mere figment of imagination” and that he intended to capture it and “confound the sceptics”. 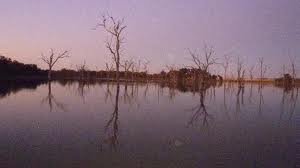 The Sunday Mail on 17 August speculated that there may in fact, be more than one bunyip in Thargomindah May Have Whole Family Of Bunyips

“The Thargomindah ‘bunyip’ – now a well-recognised local identity – startled residents this week by appearing with a mate. Now people are debating the possibilities of the species multiplying.

“Dozens of travellers along the road between Cunnamulla and Thargomindah have pulled into the edge to stalk the mysterious creature in Broken Dam, a continuation of Dynevor Lake. Many passing the spot in the early morning have seen it, but it always vanishes before they get close enough to get an accurate description.

“Last week two of the animals showed themselves at the same time to a party of sightseers. ‘They were as alike as two peas, and we weren’t seeing double,’ said one of the party. ‘They were black, about 2ft. 6in. long, with heads like dogs, and very prominent ears. They swirled away as soon as they spotted us. Probably one was male and one female, but we couldn’t tell from where we were, about 50 yards away. They looked just the same.’

“Residents hope to organise an expedition to snare the ‘bunyip’ – or ‘bunyips.’ They are satisfied that this is the only way the mystery can be solved.”

But on 24 August, the Sunday Mail reported that the search for the bunyip had been delayed in the name of democracy, in By-Election Delays Bunyip Search.

“Thargomindah prefers politics to bunyips. So much so that residents of the township have postponed any organised search for the bunyip – or bunyips – reported to inhabit Dynevor Lake, 22 miles away, until after the Warrego by-election.

An expedition, armed with guns and cameras, was to have gone out today to attempt to snare the strange creature – last described as having ‘a head like a mastiff and a tail like a duck’ – but when it was learnt that Dr. C. V. Watson Brown, Ex-M.L.A. for Gregory, and independent candidate for the Warrego seat, was going to town to address Thargomindah electors at 1 p.m. it was decided to postpone the search.

“We take our politics seriously here.” Thargomindah shire clerk, Mr. W. Speedy, told the Sunday Mail. “We can look for bunyips any old time, but there’s an election only every three years – Providence willing.”

In Burnie, Tasmania, the Advocate got in on the growing media circus on 27 August with the sensational claim that the Mayor of Toowoomba had actually shot a “bunyip” many years earlier.

“The Mayor of Toowoomba (Alderman J. D. Annand) claims to have shot a ‘bunyip’ at Felton, 40 years ago,” the Advocate announced.

“As an alternative, he describes it as a moss duck. ‘The moss duck is a queer creature,’ the Mayor said. ‘It has a very large head and short neck. When it appears above water the head is doubled into the breast, giving the appearance of a large, shaggy animal’s head, surmounted by two pointed ears. Those who know the bird have never seen it fly. It dives and reappears anything from 20 to 50 yards away. It is very rare, and possibly the bunyips reported in Broken Dam, near Thargomindah, are moss ducks.’”

Keepers of the bunyip appointed

At rhe beginning of September, it was reported that Mr Gooch and another man, J. D. M. McLaren, manager of Dynevor Downs station, had been appointed “Keepers of the Thargomindah bunyip” by the Executive Council. “Officially, they will be known as protectors of fauna in the Dynevor Lakes sanctuary, reported the Courier Mail, on 5 September.

Several days later, Carnavon’s Northern Times, reported further that “the bunyip can only be shot with a camera,” and provided yet another interesting description of the animal.

“Mr. R. R. Smith, of Thyangra, who claims to have seen the ‘bunyip,’ said it was about three feet long, two feet six inches around the body, representing a football in shape, but tapering to the head and tail.

“The head was like that of a pug dog, but more pointed, and appeared to have strings or fibres hanging down from the upper lip. Its colour was mousy brown, with a definite polish, and it seemed to be rather inquisitive.”

And that’s were the media interest in the Thargomindah bunyip appeared to end. No further reports of sightings, search parties or captures. And whatever happened to that photo taken by Mr Utz? Following the initial excitement of the newspapers in the photo, sadly, it was not reported on again. Most likely it turned out to be just another blurry image taken too far away to be of any value.

The more things change, the more they remain the same.

5 thoughts on “Bunyip of Thargomindah: Mystery animal caught in a media circus”