A woman prepares for bed, on her mind is an upcoming train journey. Then, as she joins her husband beneath the bedclothes, she notices something. A faint light glows by the bedroom door. The perplexed woman watches this strange light for several minutes, wondering to herself whatever could it mean. Her husband, lying beside her, remains oblivious.

This is the story of a warning of death from the other side, as recounted by the sole witness to this supernatural affair. Her story appeared in Sydney’s Sunday Times on 11 December 1910.

The woman writes, after first noticing that faint, glowing light by the bedroom door:

“Then, to my surprise, the figure of a man appeared in the middle of the light. He was tall and thin, and as white as marble. A terrible cold chill crept over me as I noticed him look at my husband. Then motioning to me, I distinctly heard him say: ‘Tell him I’m J_; he knows me.’

“When I told my husband he laughed. ‘Ask him his other name,’ he said, which I did.”

The woman told her husband – who was still oblivious to the additional presence in the bedroom – the name that the ghostly figure had given as his surname.

‘I did once know such a man; but he died many years ago.’ The husband responded. Still, seemingly unimpressed.

“The form nodded, as much as to say it was right. Those he spoke about were quite strangers to me, but well known to my husband.

‘Tell him, that T_ is with me, who went to Queensland, and N_ who lived next door, is coming over shortly; he has only a few days to live.’

“N_ was a very Intimate friend of my husband, and a prominent tradesman in the city.”

The woman communicated to her husband what had just been told to her by the glowing apparition by the bedroom door.

“My husband laughed heartily. ‘Why, I only saw N_ this week, and he never looked better. My dear,’ he said, treating the matter as a joke, ‘don’t allow your imagination to run away with you.’

“This remark caused the face of the figure to change.

“He looked angry, and said: ‘He will know later on. You might mention, coaxingly, that W_ often pays him a visit.’

“W_ was another tradesman in the city who died suddenly a few years ago.

‘Did you know him?’ I asked. My husband merely answered, ‘Yes’. Then the form became indistinct, only the arm and hand being visible, and gradually it disappeared. Feeling a trifle vexed, I said no more,” the woman wrote.

So, what of the warning given by the glowing white apparition of the impending death of the husband’s friend N_?

“The following Tuesday, Nov. 22, when my husband arrived home in the evening, I saw by his face that something strange had happened. He was quiet and sorrowful.”

‘Who do you think died suddenly this morning?’ he said.

The same cold shiver came over me.

“My first thoughts were, ‘What about Friday night?’ You received the warning.’ 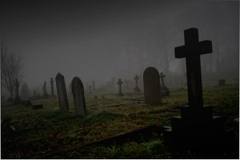 “But as he looked sad and upset, I refrained from saying any more about it. The following day my husband attended N_’s funeral.

“I think the above incident comes under the heading of ‘The Unexplainable.’ Though my husband is a thorough sceptic in regard to spirit returns or anything pertaining to it, at the same time he says there was something remarkable about the warning of death, and he gives me credit for coolness while describing the ghostly visitor. And he admits that names and all were accurate. Perhaps some of your readers might be able to give an explanation on the subject. — J.M.S.”

Unfortunately, we do not have any further details concerning the death of the husband’s friend N_.

How did he die? Was it an accident … that perhaps could have been prevented?

Did he carry an undiagnosed disease or did he suddenly fall ill?

Could his death have been prevented had the warning been heeded?

And finally, why did the apparition appear to the wife of the dead man’s friend, but not to the husband who perhaps could’ve taken action had he been convinced of the authenticity of the warning? And what was the purpose of the warning, if any purpose at all?

2 thoughts on “He’ll soon join us on the other side: Apparition’s warning of impending death”