Something strange was going on in the milking shed on Laurie Wilkinson’s dairy farm in the summer of 1949. Metal plates from Laurie’s milking machine began to inexplicably fly off and out of the shed. When tied down, the milking machine would twist and contort. An iron bar was left embedded in concrete. Tin cans floated and spun in mid-air.

Was there a poltergeist in the milking shed at Laurie Wilkinson’s dairy? 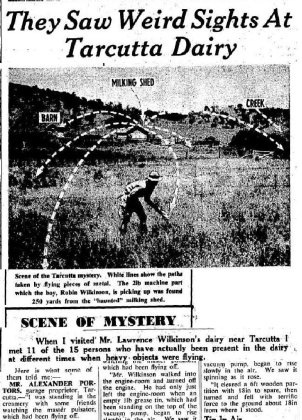 I wish I’d never seen it … it disturbs me greatly

On 20 January 1949, The Sydney Morning Herald reported on some puzzling happenings in a milking shed on a dairy farm at Tarcutta near Wagga Wagga in southern New South Wales.

For no apparent reason, metal plates and other fittings attached to Laurie Wilkinson’s milking machine were hurled from the shed out into the paddock up to 250 yards away by some unknown force.

“You might think we are ‘loco’ here, but I’ve got about 16 witnesses,” Mr Alexander Portors, of Tarcutta, told a Herald reporter by phone when the story first broke.

“I’ve run an engineering business for 30 years, and I’ve never seen or heard of anything like this. The makers of the machine sent a man here from Albury to have a look at it. When he arrived yesterday the machine had stopped throwing the plates. He went away thinking all the dairy farmers here are a ‘bit cuckoo’.”

But the strange phenomena would soon manifest again, and Laurie Wilkinson and the other witnesses would soon be taken seriously.

On one occasion, in front of intrigued locals, Laurie Wilkinson’s 15 year-old son, Robin, began to move one of the plates with an iron bar when the bar was suddenly wrenched from his hands and became embedded in the concrete floor while the plate was flung 200 yards away.

Mr Clem Gorman, of Sydney, was holidaying in the area and witnessed the flying plates firsthand. “I saw it, but I wish to God I had not seen it. It is frightening,” he said.

“There’s no reason so far as I can see why this should happen, and I’m a mechanical man. I wish I’d never seen it because it disturbs me greatly.”

The holidaymaker wasn’t the only one disturbed by the mystery. Laurie Wilkinson was at a loss as the plates kept flying. He tried cutting the fibre faces off the plates and replacing them with stronger leather, but the plates were thrown even further. He then tried holding down all moving parts of the machine by securing them to the walls and rafters of the shed with chains, wire and rope.

This didn’t work either.

The milking machine’s metal parts continued flying off, twisting the heavy iron chains as if they were soft copper wire. Intriguingly, the plates were also thrown while the milking machine was switched off and the machine belt turned by hand.

Hundreds of metal parts, weighing from two ounces to several pounds were flung as far as 250 yards away.

Even a cast-iron axle weighing 65 pounds was lifted two feet off the ground with a noise described by Wilkinson as “a terrific bang”.

Soon, Laurie switched off the machine and resorted to milking his cows by hand.

One frequent witness, Alexander Portors gave the following account to a Sunday Herald reporter. “I was standing in the creamery with some friends watching the master pulsator, which had been flying off.

“Mr. Wilkinson walked into the engine-room and turned off the engine. He had only just left the engine-room when an empty one-pound grease tin, which had been standing on the top of the vacuum pump, began to rise slowly in the air. We saw it spinning as it rose.

“It cleared a six foot wooden partition … then turned and fell with terrific force to the ground about 18 inches from where I stood.

“A peculiar thing about it was, that it seemed much bigger than it really was – as big as a football. I suppose that was because it was spinning diagonally.

“We were so astonished we thought we’d see what would happen to an empty 50-cigarette tin. We put it on the top of the moisture trap of the vacuum pump. A minute or two later it also rose over the six foot partition.”

Eleven months after the plates first began flying, the mystery remained unsolved and the disruption to the daily milking routine at the Tarcutta dairy farm continued.

On 7 December 1949, The Sydney Morning Herald again reported on the mystery in Scientists Puzzled By Mystery Of “Haunted” Farm.

“All kinds of theories, some serious, some jocular, were advanced in Sydney yesterday to account for the strange happenings reported to have terrorised residents at Mr. Lawrence Wilkinson’s ‘haunted’ farm near Tarcutta.

“For 11 months, it is claimed, parts of a milking machine have been flying mysteriously in all directions, and metal objects have been seen floating in mid-air.

“Speculation ranges from black magic and evil spirits to a new theory of gravitation.”

The paper reported that local Shire President and President of the Tarcutta and District Progress Association, Mr A A O’Brien, had invited scientists to investigate the mystery.

“If there’s any hidden source of energy in the vicinity of Mr. Wilkinson’s dairy it should be thoroughly investigated in the public interest. If it costs money we are prepared to assist financially,” O’Brien said.

Officers of the Commonwealth Scientific and Industrial Research Organisation (CSIRO) had visited the dairy but were satisfied that “the occurrences are not related to any new source of energy”.

Leonard Gulson, a Sydney physicist, posited a theory on the cause of the strange activity at the Wilkinson farm.

“Thousands of miles below the surface of the earth, far below the earth’s hard crust, vast masses of molten matter rotate at great speeds, setting up gravitational turning torques about a line drawn at right angles through the centre of each rotating mass.

“Now if the centre lines from two or more of these great rotating masses of molten metal cross at a point near the earth’s surface an increased force or torque will be created at that point.

“And if this point where the forces cross is above the earth’s surface, a distinct lifting and turning motion will be created at that spot, causing stationary objects to be whirled or whisked first upward and then outward toward the direction of whatever force is the stronger.

“Naturally, it is only at very rare occasions when such converging forces would cross in the ether at a point low enough to the earth’s surface to be observed by man in the manner experienced on this farm, and in any case, the phenomena would disappear in time as the moving masses of molten matter harden and the angle of their forces change direction.

“This theory is a more scientific and reasonable way of accounting for the mysterious behaviour of metal objects on Mr. Wilkinson’s farm than suppositions about ghosts, black magic, and poltergeists,” Gulson claimed.

But Gulson’s theory was soon derided by Professor V A Bailey, professor of physics at Sydney University. “Such a nebulous theory is unknown to me,” he said of Gulson’s theory. “It cannot be regarded as a serious solution of the problem.”

So, much for that! Now, back to the suppositions about ghosts, black magic, and poltergeists.

Whole affair is of poltergeist origin

A member of London’s Magic Circle, said to be the leading and oldest society of amateur and professional magicians in England, wrote that after visiting the dairy farm, he believed poltergeist activity was to blame.

“After a visit to Mr. Wilkinson’s so-called ‘haunted’ dairy and a careful study of all the evidence, I am convinced that the whole affair is of poltergeist origin…

“When I went to Mr. Wilkinson’s dairy I had two things to settle in my mind. Was the rampaging, milking machine in a state of neglect and disrepair? And was there any loophole for trickery?

“The answer to the first question was patently ‘No’.

“Mr. Wilkinson himself is too stolid and hard-working a farmer to want to play tricks on himself. The continued disintegration of his milking machine has imposed a tremendous physical strain upon him and reduced his nervous system to a wreck.

“Then what of his son, Robin? Here is a strong, healthy boy of 15, obviously interested in machinery, always doing odd jobs in the dairy and – most suspicious circumstance of all – the indefatigable retriever of missing engine parts.

“But I am convinced Robin intentionally was not responsible for these strange goings-on.

“The evidence of eyewitnesses is that although he was present when some phenomena were happening, he was miles from the place when other things happened.

“Yet it was the boy Robin who gave me a clue. He said, in answer to my question: ‘Not much happens when I’m away’.

“That was it. The history of psychical research in other countries proves that nearly all poltergeist phenomena occur in the presence of a human agent, usually an adolescent boy or girl.

Read about another case of poltergeist activity in northern NSW, this time involving an adolescent girl in Poltergeist rocks town: The stone-thowing ghost of Guyra.

7 thoughts on “There’s a poltergeist in the milking shed”