Soon after Kenneth Arnold’s famous 1947 Mt Ranier sighting of nine shiny flying objects moving like “saucers skipping on water,” it appeared Australian skies too were being invaded by flying saucers. From 1950 to 1954, reports of fantastic sightings and encounters appeared regularly in the nation’s newspapers. The Royal Australian Air Force (RAAF) soon took the problem of unknown objects invading our airspace seriously, with one high-ranking RAAF official even commenting that he believed objects seen in the sky over Melbourne “have an interplanetary source.”

In March 1949, a group of 23 “experts” met at the federal government’s newly-established Aeronautical Research Laboratory (ARL) to discuss the growing number of flying saucer sightings from across the country. The attendees included, among others, members of the British Interplanetary Society, Royal Aeronautical Society, Commonwealth Aircraft Corporation, and the RAAF.

With more and more members of the public seeing strange things flying in the skies, it wasn’t long before past and present RAAF personnel were claiming their own encounters with these flying saucers. The Canberra Times reported on 14 June 1950 that a former RAAF flying instructor, Mr Fred Betts, witnessed a flying saucer after the object was brought to his attention by his 4-year-old son.

“The object was moving in a south-easterly direction at speed of more than 1,000 mph. It was travelling at a terrific height and left behind a vapour- like trail of about 100 yards.”

Betts reported that the unidentified object revolved at a terrific speed and was bronze on top and silver underneath.”I had enough experience during the war and as a civilian pilot to know that it certainly was not a plane.”

Then, on 15 December, another report appeared in the same paper of a “flying ball” witnessed by ex-RAAF navigator John Mundy over the beachside suburb of Coogee in Sydney. Mundy reported that at 6.55pm the previous evening he saw a “white-hot flying ball with a tail” appear about 75 degrees above the horizon. The obect flew straight and level from south to north for about 12 miles, accelerated and then disappeared. Despite the fact that Mundy, an experienced navigator, stated the object accelerated before dissapearing, an offical from the Observatory said that what Mundy saw was probably a meteor.

When you see a flying saucer

In February 1953, a committee was established to investigate the continuing spate of sightings.

“If you should see a ‘flying saucer, or even something like one, you should immediately notify the Australian Flying Saucer Investigation Committee,” Melbourne’s The Argus announced in its article When you see a flying saucer … which appeared on 25 February. The committee, while having “no political, military, or official affiliation,” had as its chairman Mr D.K Thomson, a former RAAF pilot.

“We’re attempting to approach flying saucer reports with intelligent curiosity. We have no preconceptions whatsoever. Each report will receive careful and impartial consideration. ‘Significant sightings’ would be referred to experts in physics, aeronautics, meteorology, and other sciences.

“So far I haven’t seen a flying saucer, or anything like one,” the former RAAF pilot turned flying saucer investigator admitted to The Argus. 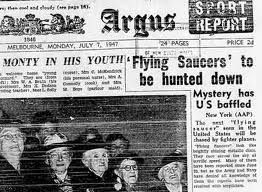 In January 1954, the RAAF finally broke its silence on flying saucers, making its first official statement. It revealed that the Air Force had investigated hundreds of reports since 1947.

One of those earliest sightings was apparently reported by one of its own. In 1947, RAAF Flight Sergeant Leslie Bastin and his daughter, Jean, witnessed a “pewter type metal structure, with a domed top and slightly less domed on the bottom, with a flange around the centre of it,” hovering over the gully behind their home at Lawson in the Blue Mountains. They watched the strange craft for around half an hour before it silently and quickly departed. Australian UFO investigator, Bill Chalker, interviewed Jean years later. Recollecting the sighting, she said she was sure her father had reported it to his RAAF superiors.

A high-ranking RAAF spokesman, while commenting on the RAAF’s offical statement admitting to its interest in flying saucers, made some refreshigly frank admissions, especially for a millitary official.

“We are anxious to get to the bottom of the reports. We have an open mind, but who are we to say the public is just seeing things,” he said. “We do not know if we are the only planet with life on it or if there are better brains in the universe than ours. We should be flying into space ourselves within 100 years.

The RAAF spokesman went on to say that the Air Force treated all reports confidentially and that cases would not be published in order to avoid copycat reports.

The Cairns Post, while reporting the RAAF’s official statement on flying saucers on 9 January 1954, also included the two latest sightings:

“Meanwhile Melbourne’s spate of flying saucer reports continued today when two more were reported. The first was from Mr W. Allen, manager of a Malvern shoe store. He said that he saw a shining circular object passing over Malvern.

“A Department of Civil Aviation officer said that only one aircraft was in the area at the time. It was a DC3 which would have passed over St Kilda on its way to Tasmania. The radar at Essendon picked up nothing.

“The second report — not received until late today was from a North Kew woman. The woman who asked that her name should not be published, said she arrived home about 3am today and went outside to cool off before going to bed.

“’I saw what I thought at first was a large yellow star,’ she said. ‘I also thought I heard a whirring noise, but I could have imagined that.’

“’The saucer was low in the sky and stayed in the same position for some time. It was like a star with lights radiating out from underneath it.’

“The woman woke her 17-year-old daughter, who produced a telescope which she focussed on the object. The girl described the saucer as being like a balloon or a big electric light globe. Something like a lighted platform appeared to be let down from it as she watched. Then the saucer faded away over Heidelberg.”

Commenting on these latest Melbourne sightings, the RAAF spokesman said he personally believed “objects seen in the sky over Melbourne have an interplanetary source.”

In December 1954, flying saucers would cause further headaches for RAAF officers. According to The Sydney Morning Herald on 16 December, the Nowra Naval Air Station went on alert to watch for unidentified flying objects after a RAAF pilot had reported two flying saucers three months earlier.

“Officers at the station said this today during an inspection of the station by the Minister for the Navy, Mr J. Francis.

“Apart from admitting that the objects had been seen, naval officers told journalists accompanying Mr Francis that investigations into the incident were ‘secret’.

“The station still has not established the nature of the objects seen three months ago. The pilot who reported the objects was flying a Sea Fury at night in the Goulburn area.

“He said the objects were lighted. They travelled faster than his aircraft [220 knots] and passed him, flying close to his aircraft at about 15,000 feet. While inflight the pilot reported the objects to the Nowra station by radio.

“Radar operators then tracked the Sea Fury and did locate two other objects in flight.

“Inquiries later established that there were no aircraft flying in the area at the time. The pilot has since made a full report on the incident to senior officers at Nowra.”

This incident was investigated by Bill Chalker and the Sea Fury pilot, Lt. J.A O’Farrell was interviewed by famed US UFO investigator Dr Hyneck on his visit to Australia in 1973. For more on this case, check out Bill Chalker’s report.

Between 1950 and 1959, the RAAF investigated more than 400 sightings and a further 1,300 sightings between 1960 and 1980. Over the years, many of these reports were made available to UFO investigators on request.

But the RAAF’s interest in the phenomenon appeared to wane, at least publicly, over the years. Finally, in January 1994 RAAF Wing Commander Brett Biddington, on behalf of the Chief of Air Staff, informed civilian UFO groups around Australia that: “The number of reports made to the RAAF in the past decade had declined significantly, which may indicate that organisations such as yours are better known and are meeting the community’s requirements. Therefore, the RAAF was not going to investigate or collect any more public reports from that date on.”

With the closure of the RAAF’s UFO investigations, did the Australian Government also lose interest in the UFO phenomenon? Not necessarily. Apparently, there is evidence that other government departments continue to investigate Unusual Aerial Phenomena (UAP) or Unusual Aerial Sightings (UAS), and that Department of Defence (DOD) policy documents addressing UAP and UAS are still in use today.

5 thoughts on “The Australian Air Force & the flying saucer mystery”