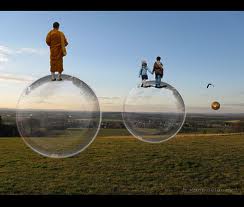 On 5 March 1895, the South Australian Register reported on the unfortunate drowning deaths of two men, Messrs Driffield and Darlot, near Perth Western Australia and the seemingly fruitless search for their bodies. “The Government diver has been engaged in searching for the bodies, but little hope is entertained of their recovery,” the article stated.

The wife of one of the men, Mrs Driffield, was returning home from Albany when the tragedy occurred and so was apparently oblivious to her husband’s demise, or was she?

“While coming up to Perth, and before any tidings could reach her, she awoke from sleep in a terribly upset condition, having dreamed that her husband was dead. Having had similar dreams when her father and brother died, she insisted that her dream on this occasion would be equally correct. The news was broken to her shortly before arriving at Perth.”

A similar prophetic dream of death awoke poor Eileen Polkinghorne one night in the winter of 1910 at her home in outback New South Wales. Eighteen year-old Eileen told her girlfriend of the dream that had awoken her in a dreadful fright. She said that in her dream she had found herself in a tank, according to the Argus. She also mentioned that lately, she had been walking in her sleep.

Three weeks later, Eileen was found, fully robed in night attire, drowned in an underground tank on her father’s property.

Two years later, a similar prophetic dream forewarned a timber worker, William Toogood, of his impending death and the gruesome way in which it would occur. On 16 October 1912, the Morwell Advertiser in Victoria related the events of that fateful day.

“A sensational accident happened in the Goodwood sawmills in the Mullundung Forest yesterday. A load of logs was being taken to the mill. Seated on the huge logs in one of the trucks was William Toogood. Two of the trucks left the rails, throwing Toogood to the ground, the logs rolling on top of him.

“Death was instantaneous, his head, arms, legs, and back being crushed. This occurred in full view of his mates, who were overcome when lifting the logs to recover his body.

“The previous night, Toogood dreamt that he would be killed next day, and he described how the accident happened, and the lifting of the logs to free his body. He leaves a widow and two young children.”

Could Toogood have prevented his death by heeding the warning and taking extra care that day, avoiding any situation that resembled what he had witnessed in his dream?

A dentist in Albury, NSW in 1922 may have had such a chance, but chose to ignore the warning, and suffered the consequences.

The Barrier Miner on 15 July reported on the dentist’s untimely demise and the warning from his wife that he’d failed to heed.

“Mrs Donegan, widow of Mr William James Donegan, dentist, who met his death through being strangled in the machinery of an oil engine at his home, states that on Sunday night she dreamt that her husband was killed in the precise manner in which his death happened on Tuesday, and that the police came to the house to extricate the body from the machinery.

“The premonition of trouble was so impressed upon her mind that she implored her husband to keep away from the machinery that day. He laughed at the suggestion, but was killed within an hour.”

Murderers fingered by a dream

Dreams have not only revealed the impending death of a loved one, or oneself, but in some instances, they’ve also revealed the truth about the death of others.

When Edward Hawkins, manager of Tieryboo Station in Queensland, was found dead in his bed, shot through the head, a worker on the property, Thomas Clayton, was taken into custody and charged with his murder.

The West Australian on 9 July 1887 reported that, “Mrs Granhauer, the wife of a settler on the Condamine, declares that she saw the whole of the scene of the murder in a dream, and distinctly saw the faces of the actors in the tragedy”.

“On being brought to Brisbane, she selected Thomas Clayton, the man accused of the murder, from a number of other prisoners with whom he was paraded. The man swears that he never saw the woman before in his life, and she makes a similar declaration. The matter has occasioned a considerable sensation, and is the subject of general conversation and speculation,” the paper reported.

In 1920, there was some remarkable evidence given at a coroner’s inquest in Picton NSW into the death of 10 year-old Ernest Weekes, a ward of the state in the care of Mrs Mary Austin of Tahmoor.

Young Weekes was sent on an errand by Austin on 22 May but failed to return home. On 12 August, his body was found, caught in a tree, on the side of a steep gorge by the banks of the Bargo River. His skull had been fractured and there were several cuts visible.

Shortly afterwards, 16 year-old Arthur Sprague, who worked for local resident James Whitfield, was arrested for the murder of Weekes. It seems he had been fingered by a vivid dream his employer had after feeling delirious one day in June. Whitfield told his wife and daughter about the dream, and he also reported it to local policeman, Constable Keenes.

The Sydney Morning Herald, reporting on the inquest on 25 November 1920, relayed the following account.

“In the dream he [Whitfield] thought he could see the accused hit Weekes and then throw him over a cliff. He could not see what Weekes was hit with. Talking to the accused he told him that if he owned up he would get out of it easier. Sprague said, ‘I didn’t do it,’ and walked away. Subsequently he [Whitfield] took Police Sergeant Sheridan to within 160 yards of the cliff at the bottom of which the body was afterwards found.”

The coroner committed Sprague for trial on a charge of murder. However, the case was later withdrawn and the accused discharged.

Not all prophetic dreams concern accidental deaths and grisly murders. Sometimes, such dreams can be life saving.

On 15 November 1923, The Mercury reported on a missing man and the dream that led to him being found.

“Mr Charles Wells, whose mysterious disappearance for a week was causing his relatives much concern, was found in somewhat remarkable circumstances near Carcoar, NSW. The missing man had been given up as lost by different search parties who went out looking for him, when Mr Percy Aiken of Lyndhurst, dreamt that he saw Mr Wells lying under a bush in Mr Robert Owen’s, paddock not far from Mr Wells’s property.

“Next morning Mr Aiken told the searchers of his dream, and their surprise and relief may be imagined when on hastening to the spot indicated by Mr Aiken one of the party, Mr Darcy Connolly found the missing man exactly in the position dreamed of.

“When found Mr Wells was in a huddled-up position, and in an apparent comatose state but otherwise seemed well. The searchers then carried him to Mr Robert Owen’s residence, where he was put to bed.”

Dorothy Dod had one such dream in 1938. Her account was published in the Western Mail on 28 July.

“One night I dreamt quite vividly that my husband and I were at a guesthouse where a boy named Eric was living. He was telling us that he hoped to get married though at the time his prospects did not seem very favourable. In my dream it appeared that his fiancé’s name was Miss Seidler.

“The incident was forgotten until almost six months later when we went to Esperance for a holiday. We did not know a soul at this place, and had never been there before. Here we met a boy named Eric, who told us that he intended getting married and enthused greatly over his fiancé.

A dream, a donkey, a bet and black arm-bands

A most remarkable prophetic dream occurred in the lead up to Australia’s race that stops a nation, the Melbourne Cup of 1870.

The Sydney Morning Herald recounted the story on 2 November 1946.

“There has never yet been a Melbourne Cup but that some people have not claimed to have dreamt the winner. Nevertheless, one of these dreams proved to be an amazingly prophetic one. The story is most intriguing.

“The year was 1870, when Nimblefoot won the event. Nimblefoot was a horse with a very remote chance of winning, according to racing experts.

“However, his owner, Mr W Craig, dreamt that the horse won. What lent particular significance to the dream was that Mr Craig mentioned that, apart from seeing his horse win, he noticed that every jockey in the race wore a black arm-band.

“Craig related the dream to a gathering of sporting men at the Melbourne Tattersalls Club, and it was received with much amusement. Up spoke Joe Thompson, a prominent fielder of the day, who told Craig that he thought so little of his horse’s chance of winning that he would lay him a bet of a thousand pounds to a walking-stick. The owner accepted the bet.

“Nimblefoot won the great event, but this is where the dream proved prophetic.

“On the day before the Cup, the horse’s owner, Mr Craig, dropped dead. In mourning for him, every jockey in the race wore a black arm-band. So it was that the extraordinary dream of the deceased was fulfilled to the letter.

“There was a sequel to the bet. A rule of the turf is that death cancels all bets. Nevertheless, the bookmaker paid £500 – half the amount of the bet – to the owner’s widow.”

3 thoughts on “Dream, Dream, Dream … prophetic visions from the land of nod”